The Northern Sea Route (NSR) has received increased international attention during the recent years as an alternative transit corridor for shipping between Europe and East Asia. In 2015, the project “Feasibility and Reliability of Shipping on the Northern Sea Route and Modeling of an Arctic Marine Transportation & Logistics System” was established to perform a comprehensive analysis of the current status and future prospects of NSR transit shipping. The project brought together several partners and numerous participants representing industry, governmental bodies, and research groups from Europe, Asia, and Russia, thus providing a unique and comprehensive overview of the subject. This paper is based on the insights gathered during the project. Firstly, it provides a comprehensive overview of the NSR’s current regulations and support services. Secondly, it combines the information on the current status of the route with feedback received from the stakeholders during project discussions for the purpose of establishing several possible future operational models for transit shipping along the NSR. It is concluded that the most probable of the analyzed operational models is a combination of ice-strengthened vessels and independent ice-going cargo vessels. This model requires a decrease in severity of ice conditions to allow for year-round commercial navigation, an increase in bunker prices, further development of maritime infrastructure and icebreaking support, and the development of new maritime insurance models. Additionally, establishing transshipment hubs at each end of the NSR with ice-going cargo vessels sailing between them is also considered to be a viable future option.

The Northern Sea Route (NSR)1 presents a potential shortcut for transit shipping2 between Europe and East Asia, which can be used in order to save fuel and/or time (see [17] for details about shipping along the NSR). In recent decades, the reduction of ice extent and thickness in the Arctic resulted in increased international interest in using the NSR for intercontinental shipping ([8]). Specifically, in 2010, Tschudi Shipping and its partners realized the first international transit voyage along the NSR resulting in costs savings ([23]). This event triggered a surge of interest for the NSR amongst non-Russian shipowners resulting in a rise in the annual number of commercial transit voyages along the NSR, culminating in 71 transits in 2013 (transit statistics available at www.arctic-lio.com). In the following years, however, the number of transit voyages decreased again due to various reasons, such as reduced bunker prices, geopolitical circumstances, cargo unavailability, ice conditions, etc.

Transit shipping along the NSR has been extensively studied throughout the years. In recent years, several studies have discussed the current status and future prospects of the NSR transit shipping from different perspectives. Marchenko [15] presented an overview of historical development of the NSR together with the current status of various shipping-related aspects. Bekkers et al. [4], Kiiski et al. [12], Pruyn [18] and Zhang et al. [24] discussed future prospects of NSR transit shipping from a techno-economic perspective. Mietzner [11] analyzed the potential of container shipping through the NSR, while Cariou and Faury [7] discussed bulk shipping. Zhang et al. [25] discussed the NSR transit shipping from the shipowners’ perspective, while Lee and Kim [14] performed a similar analysis focusing on three South Korean shipping companies. Kim [13] discussed South Korea’s Master Plan for the development of Arctic shipping, while Zhao et al. [26] discussed China-EU container shipping network in the context of the NSR. Beveridge et al. [5] discussed general interest of Asian shipping companies in navigating the Arctic.

These studies provide valuable insights from their own perspectives. However, an integrated study comprising of insights from stakeholders from different fields and from all three regions involved – Europe, Asia, and Russia – is currently missing. This is especially true regarding accurate and up-to-date information from the Russian side, which is scarce in the literature.

The project “Feasibility and Reliability of Shipping on the Northern Sea Route and Modeling of an Arctic Marine Transportation & Logistics System” was established in 2015 to address this issue and provide a more complete picture of the current state and future perspectives of transit shipping along the NSR. The project was initiated by Centre for High North Logistics (CHNL, www.chnl.no) of the Nord University in Bodø, Norway and the Institute of Arctic Logistics (IAL) of the Youngsan University in Busan, South Korea. The project was funded by the Ministry of Foreign Affairs of Norway (ARCTIC 2030 Programme) on one side and by the Ministry of Oceans and Fisheries of South Korea on the other. The project lasted from April 2015 until December 2016 as a joint research venture of CHNL and IAL with the following project partners: Federal State Unitary Enterprise (FSUE) Rosatomflot, Murmansk, Russia; Department of Marine Technology at the Norwegian University of Science and Technology (NTNU), Trondheim, Norway; DNV GL, Høvik (Oslo), Norway; and Norwegian Shipowners’ Association, Oslo, Norway. The project was organized in a series of six one-day workshops held in Norway and South Korea, with the goal to perform a comprehensive analysis of the current commercial transport and logistics operations, operational efficiency, cargo base, costs, infrastructure needs, and security and safety of transit shipping along the NSR. At each workshop, project partners presented their research on different topics, followed by the discussions. In addition to project partners listed above, workshops brought together various participants from industry and academia, including representatives of Norwegian academic institutions; international oil & gas companies; Norwegian and Finnish shipowners with experience in NSR sailing; South Korean shipyards; Norwegian Protection & Indemnity (P&I) company; and political authorities of South Korea. Additionally, interviews with several important stakeholders (mainly on the Russian, Norwegian and South Korean side) who were unable to participate at the workshops were conducted by the project partners, insights from which were included in their presentations. Consequently, this combination of partners and participants from different fields and regions of the world – Europe, Asia, and Russia – provided a new and more complete perspective on the subject of NSR transit shipping.

During the project discussions, it became apparent that there is still a lack of information amongst non-Russian shipowners regarding various aspects of the NSR transit shipping. This section tries to reduce this knowledge-gap by providing a comprehensive overview of the existing data and adding to it with the information gathered during the project.

Challenges identified by the project partners and participants

One of the key aspects of the project was to receive feedback from project partners and participants on challenges related to the use of the NSR for transit shipping. In order to model future development of the route, it is crucial to understand the main issues that the different stakeholders are facing in their operations. This section summarizes the project partners’ and participants’ comments and opinions gathered during the discussions, which are sorted under several topics presented below.

Assuming that the NSR is to become a viable transit route in the future, there are different ways in which it could be developed. From a shipowners’ perspective, different operational models (OMs) could be used to utilize the NSR as an inter-continental transit corridor. The term OM defines the mode of utilization of the NSR with respect to ice capabilities of the fleet and/or requirements for IB assistance. In this section, such OMs are defined and analyzed based on the current status of the

In this paper, the current status of the NSR regulations and support services is presented based on a review of the currently available information and on the input gathered during the project “Feasibility and Reliability of Shipping on the Northern Sea Route and Modeling of an Arctic Marine Transportation & Logistics System”. Additionally, comments and opinions from the project partners and participants related to various aspects of the NSR transit shipping are presented. Finally, several

The financial support by the Norwegian Ministry of Foreign Affairs both for the ARCTIC 2030 (NOR-15/0010) project and the BARENTS 2020 project is greatly appreciated. Also, support from the BARENTS 2020 (NOR-13/0080) project partners, namely: ABB, CHNL, DNV GL, HiÅ (now part of NTNU), Marintek (now part of SINTEF Oceans), Northenergy and NTNU is acknowledged and appreciated.

There are more references available in the full text version of this article. 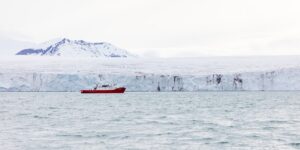 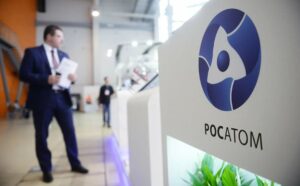 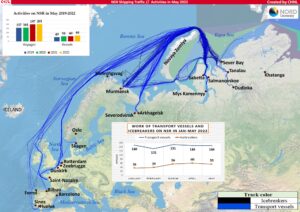 NSR Shipping Traffic – Activities in May 2022 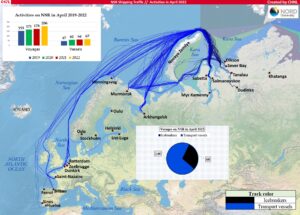 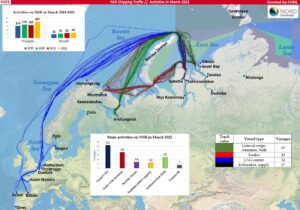 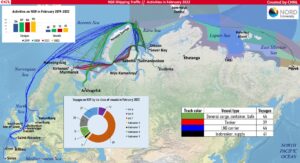 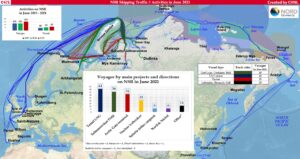 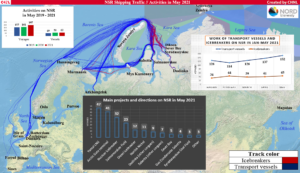 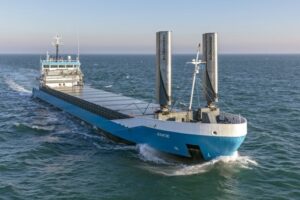 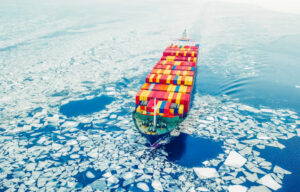 CHNL IO: CHNL Information Office Information quoted in this webpage has been obtained from a variety of sources. Whilst every effort has been made to ensure that details are correct, Center for High North Logistics cannot provide any guarantees thereof. Moreover, neither CHNL nor any of its offices and employees accept any responsibility or liability in negligence or otherwise, howsoever caused, as a result of a visitor to our web site’s relying on the information contained herein.